Understanding the process of how our ear functions 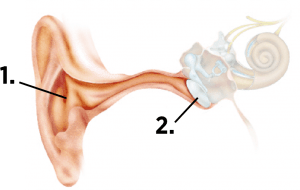 (2) this is a flexible, ellipse shaped membrane that vibrates when the sound waves hit it. The outer third portion of the ear canal is furnished with hairs which help with protection against foreign bodies. The wax produced in the ear canal comes from a mixture of secretions from the ceruminous and sebaceous glands and is basically acidic in nature. Most people think that wax is ‘dirty’ and as a result, want to eradicate it from their ears, but in fact it serves some very useful purposes. Primarily, it prevents the skin in the ear drum from drying out, and its sticky nature helps prevent against foreign bodies. It is also bacteriostatic helping to prevent bacteria multiplying and therefore helping to prevent infections. Furthermore, the wax uses a migratory process moving slowly to the entrance of the ear canal, thus helping to eradicate the ear canal of dead skin cells. 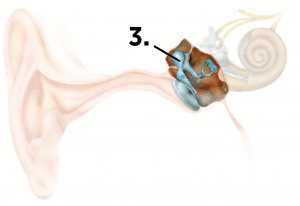 The sound vibrations continue their journey in to the middle ear. A large part of the mid ear is taken up by the ossicles, the three smallest bones in the body (3). The Latin and English names for the ossicles are respectively – Malleus (Hammer), Incus (Anvil) and Stapes (Stirrup). As the ear drum vibrates it in turn vibrates the hammer which is attached to the middle ear side of the ear drum. The hammer and anvil do not as they suggest strike each other, but as they are so tightly joined they move almost as one, transferring vibrations to the stirrup which is attached to a small oval window on the inner ear, or cochlea. During this journey through the middle ear sound vibrations are further amplified by mechanical and hydraulic actions. 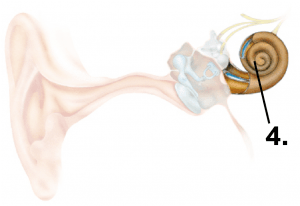 The inner ear is a series of channels and chambers that are so complicated they are given the name ‘Labyrinth’. On one side is the organ of hearing, which is coiled like a snail, and hence termed the cochlea (4). On the other side are the semi circular canals, mutually at right angles, which form the organ of balance.

These two organs are not separate but in direct communication with each other. The fluids in the cochlea are identical to, part of, and continuous with the fluid in the semi circular canals. When the oval window is vibrated by the stirrup, sound waves are transmitted through a fluid in the cochlea (perilymph fluid) causing the fluid to move. This movement causes tiny hair cells on the organ of corti to bend or shear. This shearing effect alters the ability of the hairs to conduct an electric current, and is part of the process of transmitting a nerve impulse to the brain via the auditory nerve. These are then heard as sounds.

Get support and advice